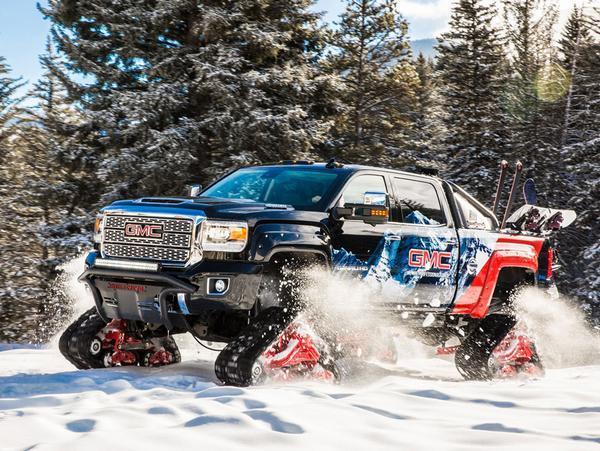 Yes, it’s a bit silly. Yes, it’s only a concept. And yes, you’re right, a new GMC pick-up is not coming to the UK anytime soon. Leave alone a GMC on tracks. But if a pick-up called the ‘All Mountain’ that looks like this doesn’t appeal to your inner child, then we’re not entirely sure what will – just look at it! 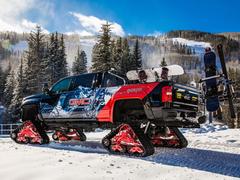 Described by GMC as taking its “signature bold design and engineering excellence to new heights”, the All Mountain is based on the GMC Sierra 2500HD Denali. Power comes from that car’s 6.6-litre V8 diesel, boasting an incredible 450hp and 910lb ft. So when GMC says the truck can “tackle steep slopes and extreme weather conditions”, we’re inclined to believe that statement.The comprehensive mods begin with those tracks, created by a company called Mattracks – very clever – in Michigan. In case you’re interested, these are the 150 Series Tracks painted GMC Red and they add “enhanced capability” to the Sierra. Might be selling them a bit short. Note as well the 30-inch light bar, Thule snowboard racks and some pretty serious sump protection. If James Bond was facing a villain in the Rockies, you feel like his henchman might have these. Probably autonomous ones, come to think of it.

Of course the entire All Mountain idea is a bit daft, though that’s a huge part of the appeal. This is not a worthy, virtuous concept, it’s a cool concept made because it boosts GMC’s tough guy image. And, hopefully, it might make a few people smile at the same time. This particular truck is staying on display in Vail, Colorado, while a similar Sierra All Mountain concept – based on the Sierra 2500HD All Terrain X – will be at the LA show. Because why not?

DS has launched the UK’s first integrated contactless payment car key, allowing owners to make purchases up to the value of £30 with their car key.

Buyers of the new DS 3 Connected Chic model will receive the 2-in-1 key at no extra cost when they buy the car during September. Money can be put on the key via an app called bPay, which also allows you to set up an automatic top-up from a debit or credit card when the balance on the key falls below a set figure. Paying in shops with the key works just as it would with a normal contactless card.

As an upmarket brand focused on technology and ‘customer lifestyle’, DS will be hoping that innovations such as the contactless payment key catch the eyes of buyers looking for stylish cars laden with modern gizmos and technology.

Mark Blundell, UK Marketing Director at DS Automobiles UK said: “At DS we’re always looking at how we can credibly complement our customer’s active lifestyles, where staying connected and being able to easily interact with the world is key. With the combination of connectivity features integrated into DS 3 Connected Chic models, and the ability to make those must have purchases by using one integrated device – with the DS contactless payment car key, we really feel we have achieved this.”

The car is priced at £15,775, starting with the PureTech 82 version, and offers a significant saving compared with buying a DS 3 Chic and ordering the extra tech as optional equipment. It’s available from £199 per month on PCP finance and is only available with the contactless key in the UK.

Usually, Mini waits right until the end of its hatchback’s life before it unleashes a GP version. More power, no back seats, not cheap. However, Mini has been unable to contain itself this time, so it’s turned the current Mini into a John Cooper Works GP concept. And it looks utterly barmy.

Ever wondered what the lovechild of a BMW i8 and Mini Cooper would look like? Gape at the GP concept’s flying buttresses and louvred wheelarches and wonder no more. Then marvel at the loop-the-loop rear wing, and the racecar-spec diffuser. All of the bodywork mods are carbon-fibre too, so it conforms to the commandment that a Mini GP ought to weigh less than its own key fob.

Up front, there’s an enormous grille – Audi, are you watching this? Because the GP’s a concept, there’s no numerical juiciness thrown in, so we don’t know what engine it’s intended to use, or the power output. Lots, presumably, given the amount of cooling going on. The standard Mini JCW delivers a rorty 228bhp, so it’s not beyond the realms of silliness that a production-spec GP could go beyond 240bhp, or 250bhp…

An assembly hall sits rusting on a 55-acre factory complex in eastern England, surrounded by a vast expanse of green, productive farmlands. The forlorn structure is a reminder of the latest failed attempt to revive Lotus Cars, a specialist sportscar maker and engineering powerhouse.

In its heyday, Lotus was revered for lightweight racers favored by James Bond and Mario Andretti. The company’s engineering talent alone was so well respected it developed a successful consulting firm with clients that included General Motors, Aston Martin, and Tesla. But consumer tastes changed. When sports cars gave way to SUVs, Lotus suffered.

Under an ambitious plan hatched in 2009 under the previous CEO, Lotus started building the new hall in anticipation of producing an expanded lineup of five new models. But the financial crisis and global recession got in the way, and Lotus’s foreign bankroller didn’t want to plow any more cash into the project. No new cars appeared, and sales continued to plunge. Work on the hall stopped dead.

In a sign of how bleak things had gotten, Lotus’s British network of dealers sold an average of just 11 cars per month in 2012.

Now there are signs that things are turning around. Over the past three years, Lotus has been selling closer to 30 cars a month in its home market. Revenue is up, thanks to a combination of cost cutting and sales of higher-priced, limited edition models. Last month, the company said it was on track to be profitable for back-to-back years for the first time since the late ’90s. Chief Executive Officer Jean Marc Gales has nursed the company back into the black, if barely, and he has reason to be optimistic.

Once only found on premium models, advanced safety systems such as adaptive lighting, autonomous emergency braking (AEB) and lane departure warning (LDW) are becoming a common feature of many mid-size and compact cars.

The sensors and cameras required by these systems have to be precisely calibrated. A slight shift in the position of the radar head or the camera in relation to the geometric axle can cause the system to deliver incorrect results,or even fail completely.

Whilst the CSC-TOOL provides out of the box coverage for VAG and Mercedes-Benz models, CSC KIT CAMERA is a separate expansion kit which extends vehicle coverage to ten manufacturers. In conjunction with expansion kits RADAR KIT I and RADAR KIT II, the CSC-TOOL now offers workshops the ability to calibrate ADAS radar sensors.

High operating temperatures, combined with the increasing regularity of stop-and-go driving, cause rapid depletion of critical oil additives. Without these protective additives, oxidation can reduce oil to heavy, black sludge in the crankcase, oil screens, oil passages, rocker arms and other critical areas of the engine.

It’s Halloween. A night upon which it’s considered entirely acceptable to carve faces into vegetables and offer strange children sweets. But there are more unusual things afoot. Mainly in this German’s back yard…

Most people think Michael Fröhlich, a classic car dealer from Dusseldorf, is a bit mental. Which is perfectly reasonable. He looks like a cross between Uri Geller and Arnold Schwarzenegger. Tanned, smiling and self-assured, he’s in the classic car business for decades.

It’s been a good year for cars being immortalised in Lego. The Caterham 620R and Ferrari F40 have joined the blocky ranks of Minis and VW campervans, and now someone’s thought to plug the gap in the ‘Lego hot hatchback’ market. This delightful Golf GTI Mk1 is the result. 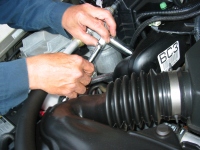 Fixing a car that is noticeably out of tune or has failed an emissions test can improve its gas mileage by an average of 4%, though results vary based on the kind of repair and how well it is done.

Fixing a serious maintenance problem, such as a faulty oxygen sensor, can improve your mileage by as much as 40%. 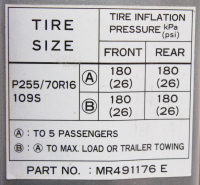 The proper tire pressure for your vehicle is usually found on a sticker in the driver’s side door jamb or the glove box and in your owner’s manual. Do not use the maximum pressure printed on the tire’s sidewall.

Use the Recommended Grade of Motor Oil 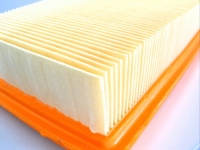 Replacing a clogged air filter on vehicles with fuel-injected, computer-controlled gasoline engines—such as those manufactured from the early 1980s to the present—or diesel engines does not improve fuel economy, but it can improve acceleration.

Replacing a clogged air filter on an older vehicle with a carbureted engine can improve both fuel economy and acceleration by a few percent under normal replacement conditions.

You must keep any vehicles driven on the road in a roadworthy condition. The MOT test checks that your vehicle meets road safety and environmental standards.

It isn’t the same as having your vehicle serviced and doesn’t check its general mechanical condition.

The leaflets ‘Your car and the MOT’ and ‘Your motorbike and the MOT’include a list of the parts of your vehicle that will be tested.

You must get an MOT test for your car by either:

The MOT text reminder service finished in August 2014. You’ll be sent one more reminder if you registered in the last 12 months.

In some cases, you’ll need to get a test when it’s one year old – check theMOT fees table to see if this applies to your vehicle.

You must use an approved MOT test centre to get your MOT. Only centres showing the blue sign with 3 white triangles can carry out your MOT.

Approved centres must show an official ‘MOT Test: Fees and Appeals’ poster on a public notice board on their premises. This must list contact details for your local DVSA area office.

If your MOT has expired

You can’t drive your vehicle on the road if the MOT’s expired. You could be prosecuted if caught.

The only exception is if you’ve already booked an MOT and are driving your vehicle to the test centre.

Read the Driver and Vehicle Standards Agency’s (DVSA’s) MOT inspection manuals and guides for a detailed breakdown of what’s covered in an MOT test.

We use cookies to ensure that we give you the best experience on our website. If you continue to use this site we will assume that you are happy with it.Ok